LGBT of Faith: Till Your Garden 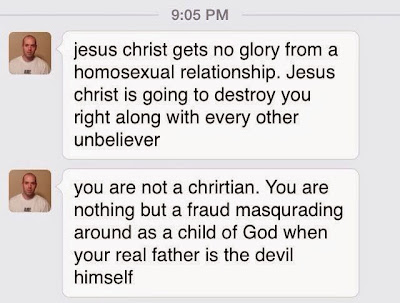 Maybe some of you who are reading this are saying to yourselves, "Oh no. Not another negative religious post in self-defense."  Well, yes and no. "YES" because I have come to the conclusion that the people who are against the LGBT community who rant about how sinful our lifestyles are.....are absolutely crazy. And "NO" because I am taking a much needed break from the craziness of it all. And I'll tell you why: nobody hones in on just one thing and tears is apart until it is completely dead who isn't already spiritually dead themselves. The other day I received a very disturbing email. I mean -- I've received some top of the line disturbing emails, but this one struck me differently. It was like a cry for help. I'll just post some of it below without revealing his name, only because this poor guy has a rap sheet longer than the ancient scrolls of the Bible.

I usually either ignore these messages or blast them out of the ballpark with their misery by exposing their emails. But something was different and one of my friends went into "detective mode" and found that this guy was a petty thief who had strange sexual perversions posted everywhere on his own FB account. One of his posts said that he was mentally ill and couldn't help it. Automatically, I felt bad for this man. Think about it -- you get this vulnerable mentally ill person who is relying on other people's direction. Then you get some religious zealot to help him out (to which he'll trust because he's religious) and sort of run with all the negative speech that goes along with it.  It makes sense. There are two extreme sides of Christianity: one is loving, compassionate, tolerant, unconditional and forgiving (to which this is explained in Corinthians) and the other is just hateful, bigoted, revengeful and intolerant. How did this religion get so incredibly messed up? Which is right and which is wrong? Which feels right and which feels wrong. I'll let you sit on that for a while.

You can't even imagine all the hate mail I get just because I try to let people know how much God loves them. I've been called a "false prophet", "the devil himself", "a pagan", "an idol worshipper" and of course, that I'm hellhound and the list goes on and on and on. There is an underlining reason why these people write with such passion and conviction in their emails to me -- a reason that may relate to me on many levels. A reason why they are searching for answers, perhaps in a way of debate or sometimes even just inquiring about my lifestyle. In my experience, the theory about homophobes being homosexuals themselves have always proven to be true. I have seen so many people try to tinker with me, and then email me later on either letting me know they're an "ex-gay", or that they were fighting off the "demon of homosexuality" themselves. I would never release their names because they were trusted and confidential emails, but it explains a lot. I mean -- why would you even want to know about homosexuals or poke at them if you weren't curious to begin with. And right there I thought, well maybe that's a bit extreme on my part, until I started getting flooded with emails by very damaged people. And hey, we're all damaged in some way, it's just the way we deal with the "junk" in our lives. 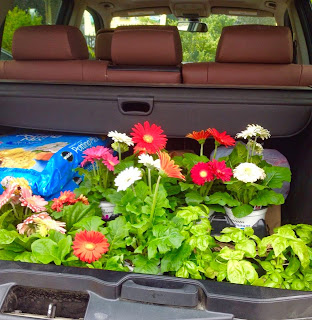 Instead of writing another semi-political piece on the LGBT community, I decided to go to the farm to pick up some flowers and soil and get my hands dirty in the garden to make our place look nicer. I took some time off from writing just to clear my head and my soul. I took some time to recharge my battery from all that negative energy that was blasted at me. But since I now understand where it all comes from, I look at it differently now. I look at it with sympathy and wonder how long they can survive in that prison of theirs. I remember when I was "in the closet" -- it was a prison. It wasn't "me". I wasn't living "my" life -- the life I was intend to live. I tried to 'fake it till I made it' and well, I was miserable. I realize that there is much more to life than defending yourself and trying to be an advocate to those alike, but sometimes you just gotta reel it in and pamper your heart and soul with what makes you happy and peaceful. This isn't to say that I'm going to quit standing up for what I believe in. I guess for now, I'm just taking a break from the topic alone instead of debating with people who have much larger issues that I can possibly contend with. 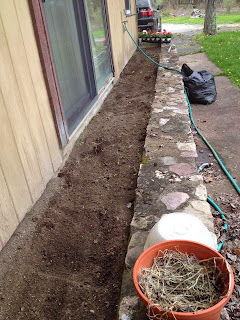 Thing is, we're supposed to encourage, edify and uplift people -- not tear them down and pick 'em apart. When you're faced with adversity of any type, it's important to really zoom in on the reason for the madness. It's not just because "the bible tells me so" type of blabber -- it has an underlining, deep-seated root that's hard to pull out. They can blame it on what the bible says or they can own up to their own bigotry and hatred. Just think of them as weeds in your garden. Just pluck 'em out one by one so that your beauty, your flowers, your true colors can be as vibrant as possible.  Till the garden until there is nothing left but fresh new soil and room to grow magnificently. Because in God's eyes, you ARE magnificent. For now, I am turning my back from the hatred and turning towards those who show me love. So if you don't see a post here tomorrow or the next day, just know that I'm in the garden, perhaps drinking a beer and letting this shit fly off my back. I guess someone will say that I'm sinning by drinking a beer. So be it.