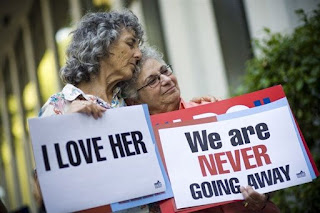 Congratulations, Maryland for being the eighth state to pass the marriage equality law. It passed the Maryland Senate 25-22 and the House of Delegates 72-67. I remember when California was going through their struggle of trying to get marriage equality and then succeeded for a short spell before Prop 8 quickly shuffled that one back into the files of “to be continued”. During that time, I remember a friend of mine who shared her views with me regarding homosexuality and if it should be legalized. She stated, “Marriage is between a man and a woman and it’s absolutely wrong for two people of the same sex to marry. It’s just not natural.” While I respect most views, the whole “unnatural” theory kind of gave it a different meaning. Since my friend is black, I reminded her that restrictions of black people being able to marry were lifted after the civil war. They were free to marry anyone in the U.S. unless they were white. Interracial marriages were considered a criminal act. It wasn’t until 1967 where all people of all races were able to marry legally across the U.S. While my friend was very pleased to hear about Prop 8 banning marriage equality for California, I asked her how she would have felt if the same restrictions applied to her since it happened to her ancestors. The only response she really had was, “Gays and lesbians cannot reproduce.” 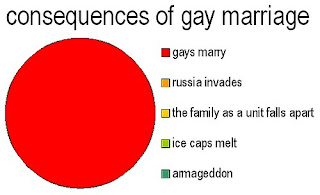 There is nothing new about gay and lesbian unions. Although many had to hide their unions from civilization back in the day, it’s a relief to know that more and more states are legalizing gay marriage and treating us “equal” - as “humans”. We love. We establish families. I wish some people who were against marriage equality would put themselves into our shoes and understand just for a brief moment what it’s like to not be able to marry the person you love with all your heart. I read a comment from someone who will remain nameless who said, “Why do all gays and lesbians have to keep constantly putting their sex lives in our faces! Why is it on the news!?” I didn’t even respond to it. I let other people chew on that thread while I watched her crumble down and finally remove her status message out of shame. The thing that gets me is - what does “sex” have to do with marriage equality alone? Every single time someone who is against the gay lifestyle talks about it in a derogatory manner, they immediately shift over into the sexual aspects of our lives. They don’t see two people having a lifelong friendship, love, family, companionship or for the most part, a life similar to theirs. All they see are bath houses, men in leather having sex in the streets and lesbians inviting a man into their bedroom. It’s all sexual. Nothing about their thoughts on the homosexual lifestyle is, “wholesome”. While there are many gays and lesbians who are promiscuous, there are many heterosexuals who are as well. 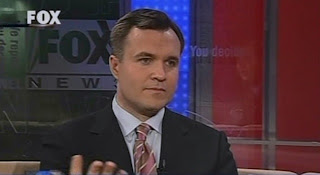 It’s a shame that we’re such a outcasted stigma still till this day. Yes, we’re progressing and making long strides, but many people’s mindsets and opinions about it goes back to the days where blacks couldn’t marry whites. It doesn’t make any sense whatsoever to me. One example of still ‘casting us out’ and leaving us somewhat in second place of equality is when I saw the news this morning. Greg Kelly from Good Day NY try to “correct” something that didn’t need any correcting. When Julie Chang, an entertainment reporter, told Greg about the first straight-friendly gay hotel opening up in NYC, Greg immediately said, “You mean gay-friendly hotel.” Julie looked at him with enthusiasm and said, “Nooo, it’s a ‘straight-friendly’ GAY hotel, Greg!” He then fought her on this and said, “No, it’s gay-friendly. I have to say it that way.” Whether not the network decided to do it because well, we all know it’s FOX News, it was misrepresenting what this hotel is advertising. I think the hotel should get an apology for it to tell you the truth. But it’s “news” - it wasn’t Greg’s opinion - tell the news as it is and not what you hope it is. It’s just another example of how closed minded some people can be. I’m just glad that more and more states are finally recognizing the importance and value of what it means to finally be able to marry the one you love without any restrictions whatsoever.