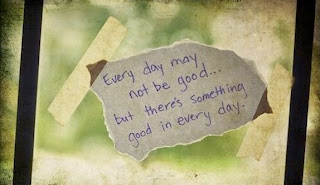 Within the past couple of weeks, I’ve been learning a lot about myself in terms of spiritually, emotionally and even physically. First, I realized my spirituality was pretty much numbed after finding out how terminally ill my dad was. It was almost like a rebellious thing - “how can you do this God” type of mindset, but thankfully I got past that. I even cursed God and thinking in the back of my mind, “Wow, that’s really gonna screw my chances of getting inside those pearly gates.” But like a child (which God wants us all do to) I begged for forgiveness and received mercy. I started diligently being persistent in my prayer and meditation - and overall, just talking to God as if He was standing right next to me. I started to notice changes taking place in me. For one, I had no fear of anything. I lived in the “now” and forgot about my past and didn’t think too much about my future. Each time I focused on my past or future, it screwed up my “today”. My ‘quick fixes’ and adrenaline junkie mindset was put aside and a constant joy came over me. I started appreciating the little things much more than I used to. I realized I took a lot of things for granted, even my health. I started cycling 10 miles per day, some days even up to 15! I got a physical exam and started eating foods and taking vitamins that helped me medicinally. In 1 Timothy 4:8 it states, “Physical exercise has some value, but spiritual exercise in much more important.” With that in mind, the two together on a daily basis has given me so much energy and excitement about life. (I just hope it lasts!) Without the spirituality, I wouldn’t have the motivation to work out. And without the exercise, I wouldn’t have the endorphins to maintain prayer and meditation. So the both of them together go hand in hand. It’s the only way I can explain it.

On another note, I also noticed that I fret a lot about the small things in life, like having a simple barbecue for friends or just having a friend over--period. Everything was a production, from cleaning the house for hours on end, to preparing food before they even arrived and then making sure everything was perfect when they got there. I wasted time worrying over entertaining, and failed to spend quality time with my company. I was too busy in the kitchen preparing stuff and cleaning which made it hard to be part of the conversation going on in the living room. Here’s a little story that totally mimics my life. “When Jesus entered a certain village, a woman named Martha received and welcomed Him into her house. She had a sister named Mary, who seated herself at the Lord’s feet and was listening to His teaching. But Martha (overly occupied and too busy) was distracted with much serving; and she came up to Him and said, ‘Lord, it is nothing to You that my sister has left me to serve alone? Tell her then to help me, to lend a hand and do her part along with me!’ But the Lord replied to her by saying, ‘Martha, Martha, you are anxious and troubled about many things. There is need of only one or but a few things. Mary has chosen the good portion (that which is to her advantage), which shall not be taken away from her.’” ~Luke 10:38-42 It just rings so true in my own life of how I fret over having the entire house spotless, the bathrooms totally wiped down, disinfected and ‘primped’ as well as slaving over everything else that isn’t important at all. After the party is over, or even when the guest has left ---- I’m. wiped. out.

I’m not saying don’t be a good entertainer or host, but make sure you enjoy yourself as well. Almost half of the small parties I have had in the past --- I didn’t enjoy them at all. I just wanted to sleep. In fact, I was so busy before guests would even arrive, that when they walked through the threshold of our door, I wanted to pass out and sleep for ten days. My mother does the same thing, except she frets days before. But, in a good way, she does something different. She actually cooks the day before so that the day of the party, she’s prepared. But why are we killing ourselves just to see a few friends or family members? I know for myself, when I go to my friends’ or family’s houses, I don’t care if they flung a few crackers my way with some water. I’m there for them -- not what they can offer me. I’m there to talk and laugh with them - not eat and drink all their booze. (Although if they have Ketel stocked, I may indulge.) But with my overall realizations of how I was, I’m totally ‘getting it’ -- finally. Most of us waste so much time doing things that don’t even matter, when they can be spending quality time with the ones they love.

Also, my sleep patterns have changed. I used to wake after a couple of hours and couldn’t get back to sleep. I would fret about it...watch the clock...fret about it a little more...then watch the clock and count how many hours of sleep I had left. It totally ruined my night. Now when I wake up, I think, “Ok, I’m up now. No big deal.” I’ll go make some chamomile tea, read an iBook or article and not think or waste time stressing over the hours left to sleep. I’m having less and less nocturnal panic attacks which drove me crazy. Those are panic attacks that start while you’re sleeping that wake you up in a huge jolt. It’s unnerving to say the least. Because I have kept God close, and have been persistent in every way possible -- I have this peace inside me that can’t be explained. Even when things are in absolute chaos - I have peace while in the midst of it. I have never had that type of peace before. And don’t get me wrong, this week would have been the week to ‘go crazy’. Dad was sent back into the hospital and actually had a little trouble with his heart. So we’re going up there every day to see him, but the pain he is in is just unbearable to watch sometimes. My heart breaks when he cries. He hasn’t laughed in -- I don’t know how long. So before going up to see him, I prayed my hardest that I would get a laugh - or even a smile out of him. I did. Two days in a row ---even with the pain. It was God. He saw the entire family around his bedside and we finally saw him laugh and joke like his old self.

So bear with me as my road twists and turns these days. I’m trying to write on my blog as much as I can, plus plug a few articles out in the process along with my editing job. I had a strong urge to write about this. Maybe you were nodding through it saying, “I do the same thing!” Or that you could totally relate to what I’m saying. But the key is consistency. Be consistent and when you pray for something and it’s answered - but then it’s taken away somehow - don’t get discouraged. Pray again. And then again. I promise, it has definitely worked for me in various areas in my life. I just never realize how really really really amazing God really is. Really.

For more of Deb's articles, please visit: www.debrapasquella.com
at March 29, 2012