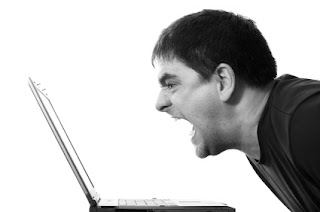 Back when I first started this blog, it was 80% worth of “religious” topics and more about defending my stance on Christianity and the various beliefs within that one religion. The other argument of course, was about homosexuality vs. religion. I spent a lot of time defending myself, writing in bold and trying to convince people “I was right” - when in actuality, no one is “right” about a belief. Belief is faith. Faith is something you believe blindly in, or in my case, and many others, they have witnessed a spiritual experience. Call it “all your head” type of stuff, but as real as it was to me - it made my faith even greater. With that being said, my faith was now “knowledge” to me - I was quite strong and sometimes abrasive with my approach about sharing my views with other people of different faiths and/or those who lacked any faith whatsoever. I argued with Christian fundamentalists about homosexuality in the bible. Looking back now, it was totally pointless. There wasn't any learning experience other than realizing how bitter people can be when discussing religion. Go figure. I’ve had my most brutal fights over topics regarding “God”. ...Imagine that? Eventually, blogging in itself became tiresome and drained every ounce of energy I had. I became bitter. It almost came to the point of bashing antigay Christians and with their own bible being my weapon. There were people blogging about the “Christian lesbian being an oxymoron” and other things that were less than pleasant.

After a while, I took a long break and just focused on my relationship with God and tried pushing aside those who would tell me to either be a Christian, or denounce my religion and just be a lesbian. Why do I have to do either or? It didn’t make sense. God made me this way - and wow - He accepts me. But, that’s “my” belief. I can’t convince anybody, other than sharing my experiences with them. I’m not going to say, “You’re wrong” - I’m not going to tell them they’re not on the “right path” or “this is the TRUTH” - because what may be truth for me may not be truth for somebody else. I had a blogger who commented on my previous article.

A person that goes by the name of Celso had written: “The bible and Christianity do go against homosexuality much like it goes against many other things for no rational reason. You're prescribing to a religion that hates you, quite honestly. Why even bother with it? The woman is insane, clearly. But insane because of what her religion has taught her. The good thing is that society and people don't need to believe in the bible since it is nothing more than a man-made fallacy strung together by illiterates in the bronze age.”

Me: “There are so many people who interpret the bible differently. For Celso's comment - I believe in the bible, however, I also believe that what people interpret as "homosexual" is more on the lines about promiscuity, as it is also bad to have "pre-marital" sex ---but who has never had pre-marital sex before? It's much more than just "reading the bible" ---it's seeing through the lines and understanding it on a much deeper level than just text alone. Also, there are many scriptures that contradict one another (so it may seem) but there are many books written by many men back in that day, so it gets a bit dicey. Although the words may be inspired by God, yes it was written by man. This is why I think it's so important, that if you are a Christian/Catholic/Jewish, etc., that you have a "personal relationship" with God before even trying to comprehend the mess they wrote years and years ago. Even the various translations - NLV, KJV, NLT, etc., have the same scriptures 'sometimes' meaning different things to different people. It's kinda like a game of telephone. (OK, bad analogy!)”

Celso: “Actually god is a lot of things according to the bible. He's spiteful, vindictive, petty, narcissistic, violent, bigoted, oppressive, homophobic, sexist, etc, etc, etc. He's all about love but also kinda-sorta condones slavery, bride-price and human trafficking. Hmm. He's real great! I, for one, am thankful that there is zero proof to his existence.  It's very convenient to fall back on the good, hippie parts of the bible and completely not bother to acknowledge all the horrific things god condones and wants you to do in his name. I know most religious people have selective biblical memory but come on.  Deb, people have been leaning towards atheism (which is the fastest growing group in America) because people are getting better educations and distancing themselves from the spells and burning bushes of the bible. It's a puerile belief to think that god invented the world and loves every single person on it and actually cares about them.  In fact, it's ridiculous to believe any loving being is on our side when so many people, regardless of how devout or good, suffer tremendously. God clearly only loves people that grew up in industrialized nations. Even then, you better not be a minority.  Honestly, is it any wonder that deities always choose to show themselves to poor, bewildered and uneducated people? I often wonder why an intelligent god would choose to present himself (and son apparently) to illiterates in bronze age middle-eastern wastelands and not China which was much more advanced at that time.  I guess god is a populist.”

Me: "I totally understand where you’re coming from. Look at your very first comment where you said, 'The good thing is that society and people don't need to believe in the bible since it is nothing more than a man-made fallacy strung together by illiterates in the bronze age.' With that being said, then you have your choice not to believe in the bible or God, however there are some people who believe differently, for example me. I have had actual spiritual experiences that have led me to not only believe God loves all of us - but that He exists. The problem with “faith” alone is, the more intellectual one gets, the more science will debunk God. ----Now, since science and spirituality DO not mix, the less belief there is in the hereafter. But if God created science - which I happen to believe He did - then why on earth would He ever have us figure it all out? You gotta think about that. The bible has so many stories in it that have so many translations that it’ll nearly blow your mind. If you sit, pray and meditate before opening that big book of “wrathful things to come” ---you’ll see some amazing scriptures that will warm your heart. The book I published, “A Prayer Away From Healing” has many scriptures in it that I interpret for people who lack faith that want to know more about ‘what it all means’.   In John 20:29 it says, “You believe because you have seen me. Blessed are those who haven’t seen me and believe anyway.”  I've visited your blog. You seem to be very angry at conservatives, Christians, etc. I'm guessing you've been burned by them like I have too. Understandable if that's the case. I respect your beliefs...or lack thereof.”

After that last comment, Celso decided to rebuttal in a very defensive way, calling me “foolish”, “tacky”, “spineless”, "scummy" and that it’s “all in my head”, as well as other angry responses that I chose not to release onto my blog. My thing is: I’m so done with arguing over religion with people. Feel free to share your views, thoughts, beliefs, whatever ---but if you’re looking to fight with me over faith, it’s not going to happen. I can only share what I believe - I can’t convince you and vise/versa. You can share your thoughts on why you think God doesn’t exist, but don’t call me “foolish”. Celso’s website is called, “Evil Gay Agenda”. Most of this blog is dedicated to their distaste in Christians or even people of their own community, as they viciously critiqued the entire cast of The A-List NY, which two cast members happen to be friends of ours, Ryan Nickulas & TJ Kelly. Every blog post of theirs has such a bitter theme to it. I don’t think there is one positive article in that entire blog.

While making his critiques on The A-List NY, he commented about Ryan Nichulas:
“Ryan is hairdresser/gold-digger who claims that, 'at any given day, you could come into my salon and sit next to Pamela Anderson, Isaac Mizrahi or even Rachael Ray.' So make sure to sit down on a clean towel and avoid exposed surfaces at all times! Ryan married a rich older guy, his 'Mr. Big,' to live out his delusion dream of being an over bleached Carrie Bradshaw. He definitely succeeds at coming off as a fictional, vacuous, one-dimensional character.”

Umm, can anyone say green-eyed monster?

For TJ Kelly, Celso writes: “The banal, token catty queen and most obnoxious person thus far. His presence in the show conveys that typical image of a boring, haggardly cunt of a gay man that revels with every insipidly trite comment he makes. His goal in the show is to be as outrageous as possible for maximum screen time.”

Wow. That’s an angry critique if I ever saw one.

In another unrelated article, Celso writes, “Religious people know little about their own religion and next to nothing about others. I cannot fathom ever joining an organization without knowing exactly what I was getting myself into. This study also highlights the salient point that Atheists are smarter. We are Atheists because we know about religion, not because we have a lack of it. And we are smarter because we sought out that information in the first place instead of blindly following silly religious doctrine like a cattle to slaughter. The only people lacking in knowledge seem to be the religious.”

Celso says he or she is “smarter” because they lack faith. Celso also stated that the only people who believe in God are those who are uneducated and poor. I guess he thinks our own president is stupid, and yes...poor too. After not posting Celso’s comments, he or she then decided to continue commenting, knowing I wouldn’t release it calling me a “coward” and other lovely gestures. I have to say that I can kind of relate to Celso. I’ve been there before. I have been burned by other Christian people in the past and it caused me to be super defensive with almost everything in my life. I was bitter and it showed. I would claim “Christianity” but somehow, I wasn’t showing it. I’m not perfect and I know I have a lot of work ahead of me, but this blogger, Celso reminds me of myself about seven years ago or so. I remember being that outraged over everything and consumed with bitterness. Although this blogger is not “religious” and yes, atheist, I pray that he or she has peace in their lives and hopefully, one day, they’ll realize that people they rant on and on about aren’t out to get them as much as they think. Peace comes from within first, and as a result, the peace ultimately shines through that person.
Peace my friend!
Celso Debra Pasquella Evil Gay Agenda homosexuality LGBT Ryan Nickulas The A-List NY TJ Kelly