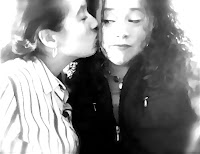 If I have gained any perspective about homophobia, sadly enough I’d have to say I’ve learned an awful lot this past week in Provincetown, MA. This small town is one big gay mecca for those who want to be themselves without any judgments or ridicules of their sexuality by those who are ignorant or perhaps, homophobic. For the past decade or so, my wife and I have been visiting this town in confidence that if we decide to hold hands walking down the narrow streets filled with shops, cafes and art galleries, that we would not be mocked for being lesbians. We’re typically not the PDA types (public display of affection) and we don’t go around putting our relationship in other people’s faces, however it is a very liberating feeling to be in our element with people alike, and those who aren’t judgmental. To be “ourselves” in our own hometown would be like seeing a nun and some burly man kissing on the side of the road. (Of course you wouldn’t see that because nuns are usually lesbians anyway.)

What saddened me the most during our stay in Provincetown were two men maybe in their late twenties walking in front of us holding hands. (That’s not the sad part.) The sad part of it was, there was a man sitting on the bench with his friends in the center of town calling the couple faggots as they passed by. Whether they were visiting family or friends --or (gasp) local residents, this is quite rare in Provincetown. With all the homophobic rage going on lately, including a man being beaten in the bathroom of Stonewall in NYC because he was gay stirred up a lot of emotions for me. I was right behind this gay couple holding hands with my wife. Funny, they never said one thing to us. In fact, we got the opposite reaction - more of a catcall type of response. I guess it’s more accepted to be a lesbian than a gay man in a straight man’s eyes. Or is it something on a much deeper level? If these homophobes were so outraged by two men holding hands, why weren’t they outraged by us? Was their sexual orientation threatened? When a pack of wolves are together, they become “tough”. I wonder if it would’ve been different if this one particular man was sitting on the bench alone without his strong ‘tough guy’ friends.

Years ago I was hounded by a religious zealot who had offered me to stay at her home and go to her church if I would leave my partner and marry this “nice boy” in her congregation, as well as take my Christian-based book off the shelves. I was surprised at her offer, however one of the most saddest things to see is someone living a lie, and I certainly didn’t want to do that. Months later, I soon found out that this same woman was an ex-lesbian. Yes, you read that correctly ----an “ex-lesbian”---- a woman who used to go with other woman intimately but changed her ways once she met this Christian fundamentalist man who convinced her she was living a life doomed to hell. She called me “disgusting” and how I mocked God by claiming to be a Christian, yet spending my life with a woman. She compared me equivalent to those who are pedophiles, rapists and murderers. She even went as far to ask me to not call myself a Christian if I’m going to call myself a lesbian. The biggest sin is to turn someone away from God, according to the bible. This person was so full of hatred and rage that I began to wonder about her underlining motive. Repression is a huge motivating factor to mock someone who represents all you stand for, or secretly stand for. Repression makes people lash out in anger, rage and jealousy. Repression can be deadly. Why would a religious person focus on two people loving one another without harming anyone, and yet, not focus on the senseless murders that occur each and every day?
Although our shocking experience in Provincetown was only a one time deal, it was an eye-opener - that no matter where you go, there they are. Nobody’s safe, not even straight people. Look what happened to Justin Bieber. He was at an arcade and was harassed by a 12 year old boy calling him “faggot” repeatedly. He’s not even gay. How are these kids being raised? The kid went to put his hand toward him, but Bieber pushed it away in self-defense. Now the kid’s dad is trying to sue. Think about it: some dinky 12 year old boy calling the cute & popular (and oh so rich) boy a “faggot”. Hrmm, does it spell out J*E*A*L*O*U*S*Y to you? People can’t stand to see other people happy or see people succeed in life. And for a 12 year old boy to be calling another kid a faggot is detestable and truly represents how he was taught at home in my opinion. His father should be sued for harassment if anything else. I guess I’m just sick and tired of jealous & hateful, repressed bigots giving other people a hard time just because they’re being who they want to be in life, not what they were dictated to be.
For more of Deb's articles, go to www.debrapasquella.com.
Debra Pasquella Justin Bieber Provincetown Stonewall