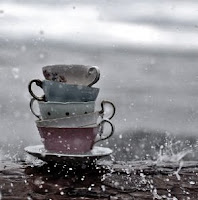 I’m working on four hours sleep and two cups of black coffee. The rain outside is somewhat comforting, like little pellets of God's tears falling onto my skylight windows. It looks beautiful. The raindrops are making tiny circular ripples in each puddle they create out on my garden patio table. As the darker clouds move in, the wind picks up, creating a beautiful dance for the trees outside. Days like these, I don’t ever want the sun to come back out. There’s a certain kind of feeling I get when it storms like this. I live inside my head.

I tend to think too much, feel too much and react too much. Sometimes the rain brings out deeper thoughts on levels I never knew possible. Thoughts as: why are we here on earth? What’s our purpose? Why doesn’t God let us know why we’re here?  I know theologians and people of faith can bust that question in half and come up with a million reasons why, but truth be it: we will never ever know until we meet our maker. Why do we go through so much turbulence in our life? Why do people hurt others? Why are we constantly fighting and trying to prove something? Is it worth it?

“The fastest runner doesn’t always win the race, and the strongest warrior doesn’t always win the battle. The wise are often poor, and the skilled are not necessarily wealthy. And those who are educated don’t always lead successful lives. It is all decided by chance, by being at the right place at the right time. People can neer predict when hard times might come. Like fish in a net or birds in a snare, people are often caught by sudden tragedy.” -Ecclesiastes 9:11-12

We work hard to get from point A to point B. We work to pay the bills, to keep a roof over our heads and to maintain life as it is.  Some of us work to gain more power and abundance, while others simply try anything to get rich quickly. When a traumatic incident in my life hit home while I was sixteen, I decided to quit school and work, so I could help out at home since my mom was going to be without my dad for a while. During the right time and the right place, I got into a medical firm as a temp doing product control testing for computerized PDR handbooks in New Jersey. That led into advancement in my position to data entry, which led me into the world of accounting since I was very good at numbers. My career for most of my life was accounting and no one asked about my degree, because I had simply moved up from a previous position, which gave me hands on experience, plus tons of references. I had made more money than my friend who had finished college, stuck in a retail job making a bit over minimum wage.

All these jobs were meaningless. I just wanted to help my mom, take my parents on a vacation they would never forget and to have a savings of my own just to maintain life as is. I never wanted a big mansion or dreamt of having way too much than I can handle. I just wanted enough. I wasn’t settling for mediocre nor refusing to apply myself: I was just happy with the way things were. I was enjoying my life and still doing that.

A person who had been very close with me stated to a few people that I was “uneducated”.  She had said, “She quit school and she’s uneducated.” Of course, this being out of anger, I knew where it was coming from, but I was hurt nonetheless. While she sits at her entry level position, while having completed school for many years, and then coming back home to her one bedroom apartment not being able to pay the rent on time, I can only assume the motives of why this was said. Or, I can just believe her and chuck it up to, “Wow, I really am uneducated.”
Although I believe that education is important, I also believe that hands on experience and the determination to use the skills you already possess is better. There are some people who don’t even have a job of which they majored in---and that’s ok. But, to put down people who work hard and yet lack the desired “education” from a schooling program is detestable. My father stopped going to school at the age of fourteen and was able to provide a five bedroom house for his entire family and enough food for an army that my mom always cooked every night. 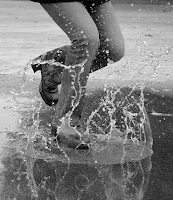 I think people place too much emphasis on “status” and focus more on immaterial things, rather than the accomplishments --- the accomplishments that one makes while having the talent they have used given by God...not school.   So yes, I may be “uneducated” in terms of finishing school, but I know better to why that statement was made in the first place.   Sometimes common sense outweighs book smarts in most cases.
book smarts common sense Debra Pasquella education