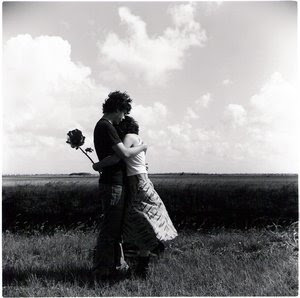 Can a devastating event that had occurred in our lives from the past affect us in various ways today? I clearly knew it would happen. I waited for my boyfriend to come over so we can “talk”. I opened the door and saw his face. It wasn’t the same ‘at ease’ face that I had always known. It said more. I stood there with a glass of water, as he watched my hand tremble in fear. I knew the next words out of his mouth; I knew what was going to happen next. Before he started talking, tears streamed out from my eyes. It was the same feeling you get when you receive a telephone call about someone you care about who had just passed away. He was passing away from my life - not in the physiological sense, but he was choosing to leave my life. We stood there in the kitchen hugging for God knows how long. I wasn't ready to let go of him just yet.  I cried on his shoulder and held him as close as I possibly could.  This would be our final embrace.   It was a bittersweet and beautiful ending to our love relationship.

I clearly remember getting violently sick, hugging the toilet bowl as though I had just chugged a bottle of vodka down in one sitting. I was completely sober. I was too sober. I remember calling my best friend, and then she called all of our other friends, even one that lived over an hour away who had to take a bus over to come and comfort me. I had 15 girlfriends over trying to help me with this traumatic event. It felt like I had died, but, at the same time, I saw how much my friends really cared for me. They were there, trying to make me laugh, holding my hair back at times when I got sick and just being there for me, no matter how long it took for me to calm down. I’ll never forget that. (Most of them are on my facebook account, so thank you!)

Although I’ve always known I was a lesbian, or at least had more of an interest in women, I did fall in love with that man---hard. We remained friends for a long time after our breakup. He even proposed marriage while our friendship was in full bloom, however at that time, I was already with Madelene.  He was even engaged to someone he was set up with in Pakistan. He didn’t want to go through with it. He would call Madelene “my friend”. He didn’t understand how two women could be together - it wasn’t natural - it was like being with a sister, he'd explained. He didn’t say that out of disrespect either. He was born in London but had Middle Eastern influences, which kept his ability to be opened about other lifestyles a bit limited. This didn’t mean he was ignorant or prejudice, he was just not knowledgeable about it.

With our history of being together and the wonderful times we have shared, I am so happy to see this man happy with a family of his own. He had always wanted children and to see that happen for him makes me happy. Even though we've lost touch, I will never forget the one person who was my best friend and lover. I fell in love with him the very first time I looked at him. I remember his big brown Middle Eastern eyes - something about a Middle Eastern man still does something for me. I find them most attractive out of all the cultures I’m familiar with. But it was more than just his appearance, it was the way he treated me. He was my complete other half - always listening to me without judgment and sharing his beliefs as a Muslim, yet respecting my beliefs as a Christian. I know I was young back then, but I have learned so much from this one person that I will never, ever regret dating him for those few years we were together.
At times, I can still feel the pangs of our breakup, but I know that it was good for us, because we've both learned so much out of it.  We went through a lot and taught one another things we've never would have known today.  Even though it was over 15 years ago, I still remember everything he had shared with me: his vulnerability and bravery to show his soft side, his knowledge of many and various topics, his spirituality and faith that led him through in life, his family values and how compassionate he was to so many people, especially the ones that were close to him. His respect for his parents and family were amazing. He helped random strangers in need of assistance and had an underlining affinity for those who were struggling in life, because he knew what it was like to start from scratch.  He had to start over when he moved to the U.S., and worked his way up to own his own businesses.  He chose to do the right thing for his life, and I respect that.  I was ten years younger than him and going through my 'wild & crazy' phase.  He needed more substance; a woman who could provide a family and home for him.  I wasn't it.  I wasn't ready.  He needed to choose, and I respected that, through my selfish, salty tears that wanted him to stay with me.

When I hear my straight friends talk about how there are no good men out there anymore, I always disagree with them. I know at least one man who is perfect. His wife and kids are very lucky to have him.  I'm sure there are many men out there like this.
breakups Debra Pasquella love relationships