- June 12, 2006
Here’s a story
Of a JAP named CP
Who was coming up to see Deb and Mad
She was wearing tons of gold, like her mutha’
She even had real pearls

Here’s a story, of poor poor “hotband”
Who was driving CP into downtown
They were driving in traffic, all together
In hopes to have some fun

Enough with this horrible version of "The Brady Bunch" song. CP and her husband was kind enough to take a ride over to my end of town and see what it's like in "Deb's world". I told them that everything on this blog and what I say holds true. 100% pure honesty dished out on this blog.

We sat down at a table and I noticed CP ordering a white zifandel. Hmm. Amateur drink. We have to get her a real cocktail. No--I mean a 'real cocktail'. You're in my world now CP, you drink what Deb drinks! 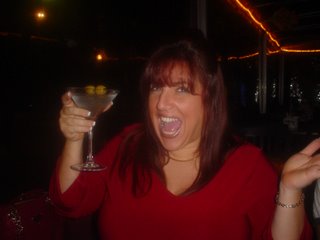 Ah yeah--baby's first martini. Ain't she cute? She was so excited to experience the Ketel One martini. She knows that this is Deb's favorite drink, so I took it upon myself to order one for her as I saw her husband cringe in horror. Come on CP, take baby steps---one sip---see how you like it! 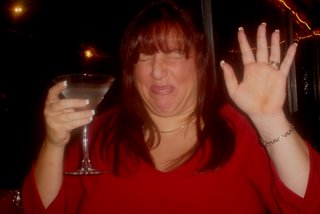 Oh come on! It's not that bad. The first sip always has a bite to it. It's like sex, it hurts at first, and then after a while, you absolutely love it. In fact, you're addicted to it.

Here's proof of that theory: 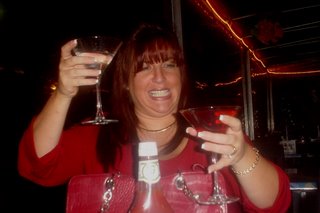 She couldn't get enough once she started. CP was ripe...in fact, I even thought she was handling herself quite well! Then when I headed over to her blog, I found out how hungover she was. Our night out was a lot of fun, and CP is exactly how I pictured her---her personality is amazing!

I have much more pictures of this night, but for some reason, blogger will not let me upload anymore photos. If anyone knows what I can do to provide more photos for this post, please let me know.