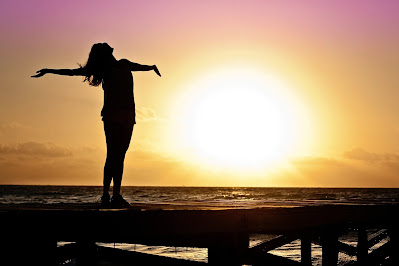 For the past couple of weeks during the late morning hours, I've been sitting out on my deck in the sun to boost my vitamin D levels. On the first day, I grabbed my new sunglasses that cost me an arm and a leg, and didn't feel like I was getting enough sun for some reason. So I took off the glasses, and felt entirely different---almost like the sun was penetrating through my mind, body and soul. It was euphoric---as if I was sitting on the beach. Even later in the afternoon/early evening, I would sit out on my back porch which faces the west and did the same thing. Absolutely euphoric. Why?

I didn't beg for an answer, I just knew that my sunglasses were just for driving now.

Last night I learned something new. It's called, "sun gazing." I mean---how many times were we told not to look directly into the sun? And if you're like-minded, you know that whatever is healthy for you, big pharma will replace it with something that'll require a dependency for more "remedies." Any natural remedy, like cannabis, CBD oils, and even eating dandelions out on your own front lawn is seen as negative. We were also taught that the sun is very bad for us, because it gives us cancer. But did you know that your sunscreen is more of a culprit for causing leukemia and other blood cancers? One of the chemicals called, "Benzene" is known to cause cancer in humans. Sunscreen is even harmful to aquatic environments, bleaching and killing coral, causing reproductive issues and birth defects for fish, mussels and sea urchins.

Back to my point: sun gazing. It's a form of grounding. From the College of Complimentary Medicine, they report, "The ancient practice of sungazing believes this daily ritual overall improves mental, physical, emotional and spiritual well-being. Having this intention and practice of connecting and feeling and absorbing nourishment from the sun is said to enhance this practice. Calcifications in the pineal gland are also said to decalcify with exposure to proper sun gazing. Some believe that it also increases the size of the pineal gland as shown by a man named Hira Ratan Manek (HRM) who, in a study, showed scientific evidence of his pineal gland nearly 3x the average man. HRM recommends during safe hours, start for 10 seconds, then increase by 10 seconds each day. At the end of the 3 months, you will have built up to around 15 minutes. HRM puts significant importance on a diet rich in all colours is highly recommended especially during ongoing Sun Gazing. He also says to stop increasing at 44 minutes. In combination with grounding, this is also said to help the pineal gland as the reflex for the pineal gland is in the big toe and the other toes represent the pituitary gland, hypothalamus, thalamus and amygdala which are all vital for our overall functions as humans. The pineal gland is our connection to our third eye. Our intuition. The pineal gland is a master gland and also controls the sleep and waking cycles of our bodies, perhaps this practice is something that is calling you!"

Improvement in eyesight has also been reported as well as an increase in energy, emotional well-being. Studies have shown health improvements especially more reported in women. Bliss, joy, peace and calm have also been reported. No adverse effects on personal health have been noted in studies, so either stayed the same or improvements.

Don't believe me? Try it out once the sun comes back out. We've been getting hit hard with hazy skies and dense fog, to which I can only assume "some" would love to block out the positive rays of our God-given resource---but I'll leave my tinfoil hat in the other room for now. I'll remain positive and share helpful ways to increase your happiness. It certainly helped me. I've been in a great mood, even when I wasn't feeling so great. Negative things and situations haven't been plaguing me like they used to. I could blame it on the sun, of course, attribute it to God's blessings, as well as having a higher vibration, which sweeps the lower frequencies away. (Yes, the lower frequency people.)

Enjoy today---every second, every hour and be grateful for God's natural provisions.