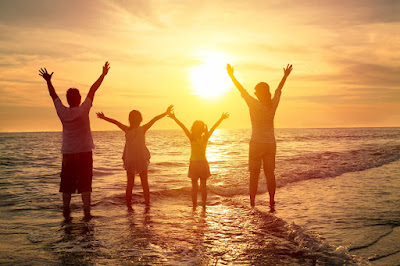 Our lives, as different as it may seem, are somehow intertwined with similar events. Some lifestyles are dramatically different, but we still go through situations where we're dealing with illnesses (of various kinds), deaths, a loss of a relationship, divorce or a loss of an animal. We can relate to at least one thing, even if we're so incredibly different. I think that's where empathy comes in. Some people have a lot, while others may seem to be lacking. So here are my thoughts on that.

This is an old story about a man who wanted to change out his life's problems for somebody else's life problems. Although it's a lengthy story, it's so worth the read:

The story is told of a man who goes to Jesus wanting to trade out his cross for a better one. He tells the Lord, "I see the crosses that others are carrying and theirs are much more bearable than mine. Why does my cross have to be so cumbersome and heavy? Other people carry their cross with ease and mine is hindering my day to day life.” Jesus leads the man to a room full of crosses. Some are big and others are small.

The man is instructed to put down his cross and then go select a new cross. The only stipulation was once he made his selection he could never complain or exchange his cross again.

He searches for hours on end. The big crosses were just as he assumed very large and very heavy. He knew there was no way he could ever carry those crosses. The smaller crosses were shockingly painful. Some had stickers that constantly stuck you in the shoulder or back reminding you of the beams you were bearing. Others were oddly shaped and rubbed the neck raw.

Finally the man came upon a cross that was perfect for him. Not too big but not too little. There were no sharp prodding objects and it rested perfectly on his shoulder so it would not irritate him as he carried it.

The man cried out, “Here it is Lord.” Jesus asked the man, “Are you sure? Remember there are no trades or exchanges and no more complaining about your cross.” The man replied, “I am sure. This is the perfect cross for me.” To which Jesus replied, ‘My child, that is the cross you carried in with you today.”

Have you ever felt like other people have it easier than you do? They seemingly go through life without stumbling, and can do everything without complaining?  I remember years ago, I met an old friend for lunch. We both had changed so much in so many ways. She started her family at a very young age. She had four children, and then had two kids later on in life. Her hands were full. On social media, you saw all the vacation pictures of them smiling, having fun, playing games and surrounded by so many family and friends. I always loved seeing their beach trips, their ski trips and their hikes up the Mist Trails near the Nevada Falls. Everything seemed just perfect. It was like photos straight out of a magazine of the perfect family.

As she drank her third glass of wine, she said, "You are so incredibly lucky, Deb." I laughed, almost spitting up my own drink thinking, "I have not left this town in years!" She said, "No, not that--I mean, you get to do what you want when you want and there are no kids screaming for you every second of the day."

I paused and just looked at her without saying one word...without judgment.

There was nothing I could've said to that. I also didn't want to make her feel like her feelings were invalid. She felt what she felt and she was honest to a flaw. Here I am thinking about how many times we tried to have kids, or looked into adopting, and in later years, wondered about 'what if I missed out' on having kids. I always thought it must've been nice to have a large family as she did. Some do genuinely enjoy that kind of life, but she felt as though she was missing out in life somehow, even with all that traveling and family togetherness. I saw it so differently than she did, but then again, I wasn't struggling to raise six kids.

Then you have the flip side of the situation, where you have a large family, and then go through a divorce, end up losing your kids, and find yourself sitting in your living room wishing it were family night again. It's all so subjective and personal. No loss is greater than another. And no life is greater than another. Also, no life is harder than another---no matter how much you try to justify it. Life itself is hard nonetheless, whether emotionally, physically, spiritually, financially, 'howeverly' (yes, I know that's not a word) --but you get my drift. Do not compare your life with someone else's. You'll torture yourself and realize, you would pick out your own cross too. I won't even say the grass is greener cliché.

When you find yourself in a situation where another friend says, "I'm just so overwhelmed and stressed right now," --- try not to say, "Well aren't we all?" Instead, try saying, "I know." And you do---because you have your own struggles too. Maybe just listen instead of comparing. And if you need to reference your own story, do so, but let that person vent to you first. Let them talk, instead of giving them a "bigger story" of your own. Validate their feelings. Let them know it's okay to feel that way. One of my pet peeves are when people try to 'outdo' someone else's story. It's so common to do, and sometimes we don't even realize we're doing it. In a lighter kind of conversation---yes this is great. But on a deeper level, never compare 'worse vs. worse.' It makes people feel like they have no right to grieve over whatever situation they're sad about.

When I'm trapped in my own pity party of one, I list down things that I'm grateful for. It helps put things in perspective for me. What's good in your life? What makes you happy about what you have? How grateful are you to wake up with air in your lungs, a hot cup of coffee or someone to wake up to? The richest people in the world want one thing: what they already have. They're not chasing after the next best thing---they're thanking God every single day for every blessing that's ever been bestowed upon them. And if you're fortunate enough to have many blessings in your life, the beauty of sharing is never regretful---monetary or not. No one has ever gone poor by giving---and that's a fact. We all have crosses to bear, some seemingly more difficult than others, but challenging nonetheless, no matter what you may think.