Whether you're a believer or not, you've probably heard quite a few Christians saying that Jesus is coming back soon. As far as I can remember, each war, each political upheaval and catastrophic event in the world has led people to believe that the rapture was coming even sooner. But the fact still remains: nobody knows the day or hour. "But Deb, there's a pandemic now!" Okay---but remember back in 1968 when the Hong Kong Flu, (oh wait, politically incorrect)---the H3N2 virus struck? The pandemic that shook the entire globe? The estimated number of deaths was 1 million worldwide and about 100,000 in the United States. Most excess deaths were in people 65 years and older. The H3N2 virus continues to circulate worldwide as a seasonal influenza A virus.  Jesus did not come back. 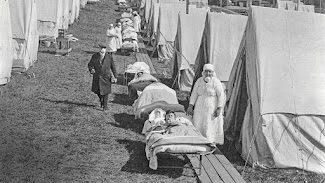 Trek back to the Spanish Flu, (oh wait, politically incorrect as well as literally incorrect)---the 1918 Pandemic. It is estimated that about 500 million people or one-third of the world’s population became infected with this virus. The number of deaths was estimated to be at least 50 million worldwide with about 675,000 occurring in the United States. Mortality was high in people younger than 5 years old, 20-40 years old, and 65 years and older. The high mortality in healthy people, including those in the 20-40 year age group, was a unique feature of this pandemic. While the 1918 H1N1 virus has been synthesized and evaluated, the properties that made it so devastating are not well understood. With no vaccine to protect against influenza infection and no antibiotics to treat secondary bacterial infections that can be associated with influenza infections, control efforts worldwide were limited to non-pharmaceutical interventions such as isolation, quarantine, good personal hygiene, use of disinfectants, and limitations of public gatherings, which were applied unevenly.

No vaccine. The human race still thrived. And again, Jesus did not return for that one either.

We've experienced earthquakes, tornadoes, hurricanes, tsunamis and nuclear meltdowns---all the things that the Bible points out to as a clear sign to the 'end times.'

"This is unprecedented" --- no it is not. We have been through this before as humans. This hasn't happened in our lifetime, unless you're over the age of 100.

So when is the right time to predict Jesus' return?

Why never? Because He will come like a thief in the night, when you least expect Him, and maybe not even when there's something catastrophic happening. That's the point---to BE PREPARED. To BE READY. To stand on your faith even when the world is peaceful. If Jesus were to appear on the clouds and return to us, how would you feel? Would you be prepared today---right now as you're reading this----if He was to return to judge us and to either take or leave us---are you ready? 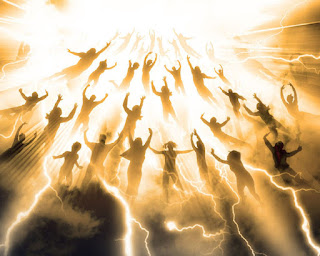 I can't tell you how many times I've seen Christian prophets on social media saying that they're hearing angels speak to them and that the time is near and to be prepared. They're hearing loud explosions and some even hearing the trumpets (as I've heard in a dream once before, but tis just a dream, I believe.) Maybe it's good to get people to turn to God while they are uncertain and scared, but I don't believe fear should be a motivator to have a closer relationship with God. Fear, is not of God.

About 25 years ago, I walked into a church called, "The Trinity Assembly of God." It was a born- again Christian church that based its sermons on the importance of repentance. And of course, being a new Christian, I wasn't ready to hear fear-mongering pastors reprimand me, while a divorcee and her new husband were sitting in the front row. I found every flaw, every hypocrisy, and every scripture to back up my ammunition when the time was right.

One night, they had a female pastor speak. She had traveled out of state to be with us and spend two hours preaching. I'll never forget what she said, although most of my body language was leaning toward the exit sign. She was explaining how the rapture would be, and how those who relied on riding the coattails of other Christians would be disappointed. (Using exact words.) They're forever in my head.

"So you've pulled up to your mom's house, expecting to see family and friends to greet you. You walk towards the front door and notice that it's open already. You slowly walk in, calling out for your mom, your dad, your sister, your brother, but nobody answers you back. As you move down the hallway, you can smell the delicious aromas of food being prepared. Somebody's gotta be home, right? As you move toward the kitchen, you can see the stove. The oven has a turkey roasting and on the stovetop, pots are simmering, ready to be taken off.

But where did everyone go? You're confused,  and so you search through the entire house inside and out. Not one person is there. That's how it'll be like if you don't repent."

This is how the threat of being unrepentant was explained to me. Back then, I was so offended over everything. "How dare they say I'm not getting into heaven! Why do they hate us?" I seriously thought they hated me and anyone else who was a new Christian. In took many years to figure out that they were actually excited that I was there with them, so they can try and save my soul, hoping I would repent. It took THIS long to believe that story. And today, I love that story. It's how I imagine it would be like if I rejected God, or selfishly continued  living the way I did. But as a baby Christian, "How dare you judge me!" And of course, I always had to look up a bunch of "judge not" scriptures to justify anything.

In all honesty, these past few years have brought me to my knees. Between losing my parents, losing my childhood home, division with my family as well as adjusting to my new environment, plus the pandemic, I surrendered myself to God. I couldn't handle all of it. I couldn't handle the many nights I laid awake with a racing heart, thinking it would finally give out on me. The anxiety, depression and wishing God would just end my life, had consumed me. I can't say it doesn't happen from time to time, as it had recently. But I keep hanging onto God, and relying on my circle of prayer warriors to get me through it all. If I slip, I'm gone. What I mean is, if I lose my relationship with God, my entire purpose, and reason being here right now is pointless. Without God, I am completely lost. Lately, it's been difficult to communicate with Him---my thoughts are just racing with random 'to-do's and worries of tomorrow, when I know the Scriptures say not to worry about tomorrow----tomorrow will worry about itself. But I'm human. 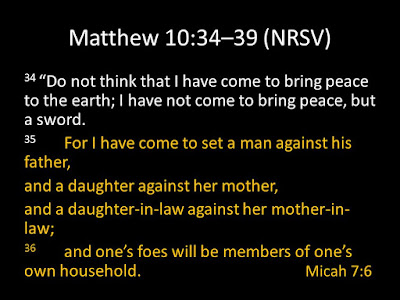 So my point to this long drawn out article is: stay strong. You're going to find a lot of "silent" division as well as publicly displayed division. On each side of the vaccinated---you're going to see people shunning one another due to personal believes and whatnot. If someone does not want to be in your life due to your personal beliefs, then that's their choice. You have no control over this.

Remember this scripture and memorize it because now is the time that it's all coming to a head. So when you feel shunned for not doing as the world does, READ this scripture aloud if you have to:

You're even going to come across people who are close to you that pretend they are believers, or do things publicly to have others believe they are. It's great to scream on the mountaintops that you love God, but when it has a motive behind it, God knows your heart, and people can sense that from miles away. Don't be fooled by other believers telling you that what the world wants you to do is "good." It's not. It's not. Whatever the world wants, turn your back from it. We are not of this world. This is the time of great testing, and people you thought would never fail, are falling into the pit of deception right now. Pray for them, because they are doing exactly as the Bible said they would do.