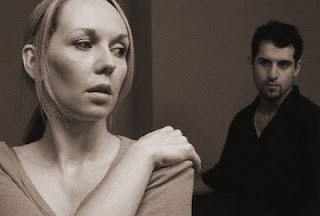 God I feel bad. It’s like I’m reliving these strange moments all over again, yet vicariously. Early this morning (or late last night) around 1am, my neighbors came home from a night out on the town. They’re a young and attractive couple in their early thirties who live right below me. Usually, I don’t hear much from them. If I do hear anything, it’s a brutal fight – to the point of physical abuse. Hardly any words are spoken in that condo except for bickering. The walls are very thin, because when they do talk, you can hear every single word. I guess it goes the other way around too. All we hear are footsteps back and forth periodically, until they go out drinking.

Well it all started last night. His loud Ford F150 (probably with no muffler) pulls up to the complex.

“Get the fuck outuv’ the car!” he yells over to his girlfriend still probably trying to unbuckle her seatbelt. He slams the car door and starts yelling a few more choice words to her. I didn’t hear much from her end. She knows that everyone in the condo can hear everything that goes on outside. Even if someone is talking low outside, we can hear everything. Low building costs I guess…

Then the building trembles as the guy slams the front door. Then, I hear another huge bang. I wasn’t sure what it was. Then it starts. They begin to fight – and I mean high-pitched screaming from her end. I never hear a peep from this little woman, but boy, does she have a set of lungs on her! Now, from the blurbs through the wall as I was eavesdropping like a nosey body, I’ve gathered that she was trying to stop him from driving home after he had more than 5 beers. She “gave a look”, (so he states), in front of his friends that indicated he had too much to drink. It wasn’t even about cheating, lying, flirting or anything…

Then, this simple argument that could have been resolved with an agreement and understanding turned into something more devastating. They start bringing up past traumas that each of them brought into the relationship.

I hear the girl scream, “You act as though you’re completely innocent! You always yell at me – over anything! And the shit you’ve pulled on me throughout out entire relationship!”
“What shit?”
“The abuse!!! The physical and verbal abuse! You abuse me!”
“I know, I know, I admit that, but why da’ fuck do you hafta’ make me look like an idiot in front of my friends?”
“I shoulda’ broken up with you 6 months ago! I don’t know why we’re in this relationship! You hit me right when we walked in! Do you know how much that hurt? Do you?”
“I pushed you.” he replies, in a softer tone.
“No. You hit me and I fell againt the wall!”

I’ve heard him throw her around quite a few times after a night out. I was scared. He sounded apologetic at this point about “pushing her”, but I still kept my ears opened. I didn’t want to get involved, but as long as I heard she was ok, then I was fine. I don’t like calling the cops on my neighbors, but last night it was getting really bad where I was lying awake just to make sure she was ok. I was up until 5am, until they fell silent and probably went to sleep.

This morning I woke up around 9am to loud screaming and arguing once again. It’s amazing how a night out on the town can manifest itself into an argument that snowballs into other issues that haven’t been resolved. You think, why can’t they just talk it out, resolve the issue about the drinking and driving, make a pact that when one person drinks, the other will drive and make up? But, it’s not that easy. As I recall myself being in numerous arguments with someone I once loved, and trying to reason with them while their unforgiving hearts still remembered ‘a time when’ would always resurface. There’s no reasoning with somebody when they refuse to forgive you. This goes on both parts. The neighbor (the guy), kept bringing up a time in the past where she flirted with one of his friends. It just wouldn’t stop. He never let it go.

I feel so bad for this couple. You can tell there are a lot of raw emotions going on and you can see how in love they are, but you can also see the hatred starting to develop. How can you love and hate someone at the same time? It’s such a fine line when the love is so strong, and if not handled properly, can turn into hate.

I just heard the door slam and saw the two of them in their workout attire and bottled water in hand ready to go jogging. I hope they can work things out.

I need coffee. All that eavesdropping is exhausting!
arguments domestic violence relationships