You would think a hospital would be clean with cold air circulating, so that any potential germs or bacteria would be quickly diminished. Not in this hospital. While waiting for Madelene to get taken into the operating room, we walked through the hallways into where she had to sign in. There were hampers of soiled gowns, sheets and other miscellaneous dirty clothes that were piled high against the corridors of one of the wings. It was warm and it smelled musty. I tried holding my breath, but I needed to breathe. It wasn’t easy. I figured this was just one part of the hospital that had bad ventilation and a bad cleaning staff.
While Madelene’s mother and I sat in the waiting room, hoping for a good report from the surgeon, there were other people in there with two loud screaming little girls. One little girl screamed so much, that she threw up all over the floor. The cleaning crew came over and just placed a towel over it. It began to stink so badly that we had to actually move from where we were.

A few hours later, the doctor came in to let us know that Madelene was doing fine and recovering in another location. He said she would be ready in about 45 minutes. I was relieved, because it was a bigger surgery than we had anticipated. When we walked down the hallway to meet Madelene and see how she was doing, she was just coming out of the anesthesia coma phase. Her head was shifting back and forth, as her eyes were rolling back a little, due to her exhaustion and pain. She looked so different. She looked so sick. I’ve never seen Madelene look so sick and so in pain before. I held my tears in. My heart felt heavy- I wanted to take all the pain for her. I wanted Madelene to feel and look alive again. This wasn’t my Maddie…there was a weak and frail girl lying on that bed, helplessly, like a child.

The nurse taps me on the shoulders, noticing my distress.

“Believe me, she’s doing great. She looks that way because of the anesthesia. Women go through worse pain than she is in right now. Don’t worry—she’ll be fine.”

The room was hot. It wasn’t just me stressing out---the room was 80 degrees! Madelene was sweating. We had to undo her gown a little, so she could get some air. Beads of sweat were developing on her forehead. We wiped her with cold clothes. Her mom fanned her off the best she could.

I quickly got a nurse to turn up the air conditioning. To my surprise, the air conditioning unit was one of those old clunkers from 1970. Why doesn’t this hospital have central air? Is this sanitary? I noticed her roommate was close to 100 years old. She constantly complained about the cold air. Why are you putting the geriatrics with a person who just got out of surgery? One says it’s hot and the other says it’s cold. It’s a bad combo.

I couldn’t help but look at the elderly patient sleeping on the next bed. She looked as though she was beautiful back in the day. Her body frail, her wrinkles showed the years of life she’s been through, and the lack of balloons and flowers showed how little family or friends she had. No one came by to visit her- ever. There was a bag of urine underneath her bed the color of a dark ale beer. We tried to determine if she had blood in her urine, or if it was just the medication. We found out that this lady was full of life days before she had a stroke. It just took her like that. It made me realize how precious our time is…while we still have it.

The next day, walking back to Madelene’s room, I noticed Madelene lying down in her bed, while the curtain that separated her and her roommate was moving around erratically. Movements on the other side indicated that there was some sort of struggle going on. Madelene was still out like a light, having no clue to what was going on around her. Then, I saw Madelene’s mother trying to untangle the little old lady who had wrapped herself up in the curtain, trying to walk near Madelene’s bed, to try to get out of the room.

A totally bad combo--one unconscious person sleeping from exhaustion, and another unconscious person up and about in a delirious state of mind. What if Madelene’s mother wasn’t there to stop this? Madelene’s plugs would have been pulled out and something tragic could have happened. I called a nurse quickly to help. Is this necessary? I didn’t like the idea of a disoriented elderly woman being placed with Madelene. It scared me.

The day I took Madelene home, I noticed how full the garbage bins were and how the cleaning staff wasn’t on top of things. The place was dirtier than ever. I was so glad to get her out of that hellhole. My OCD was out of control! While piling up the flowers she received in my arms and bags she had brought to bring it back to my car, I started walking out of the room. The first step out of the room, walking nearby the nurse’s station, I slipped and fell right on my ass! There was a stream of ammonia that flowed all the way down the hallway. It wasn’t even just ‘wet’----there were huge puddles! All of the nurses came over to ask if I was ok. I was fine. The cleaning guy got yelled at, because he wasn’t just mopping the floors, he basically made a river of ammonia. I was just happy that Madelene was getting taken out by a wheel chair. What if she had to walk? One nurse looked at me with this secret look, asking me, “You SURE you’re ok? I mean, are you SURE?” She was basically indicating if I wanted to sue. I don’t sue unless I need medical help with bills. A flower or two spilled out. I’m not ‘sue happy’. It doesn’t sit well with me.

So now, I have Maddie home. She is getting fed gourmet breakfasts, delicious lunches and fantastic dinners. Her amenities are 5 star. She’s lost a great deal of weight, and it’s my mission, as the lil' Italian mama that I am, to get her back to status quo and into a healthy weight again. (Maybe even above and beyond!) I have her walking around the property to get her circulation going. She’s recovering nicely, although she has some pain here and there that a little percocets couldn’t handle…otherwise, all of your prayers and best wishes came through for her.

It’s been a scary time for us and I just want to thank all my family friends for their prayers and especially my readers for saying prayers for someone you don’t even know. 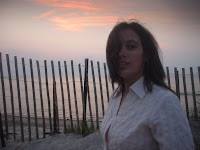 Madelene means the world to me and she’s getting the best care at Deb’s B&B. Her scar is healing up nicely. It’s very clean looking. She’s more concerned with it than anything. I call it her ‘getting her life back’ scar. Her uterus gave her a lot of problems while trying to live a normal active life. Now she doesn’t have to worry about anything. God has heard all of our prayers and I have faith that she will recover faster because of it.