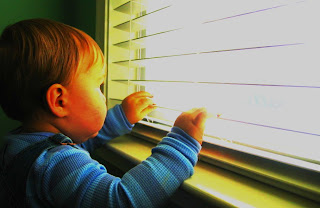 The other day, I was discussing Mother Teresa with somebody I recently met. We spoke about how Mother Teresa had personal struggles regarding her faith in God; that she didn’t feel God’s presence. My friend, we’ll call her “Laura”, said something pretty significant to me.

“It sounds to me like Mother Teresa's issue may have been she was looking for God outside of herself, which is one thing Western religions tend to do. It seems very obvious from her life she had a spiritual connection, but that does not necessarily keep a person from going through the various tribulations life presents to us.”

For a while, I’ve been going through much of the same thing: feeling as though God isn’t present. I felt as though God is “outside” of my life – so I need to wait for Him to either appear or give me some sort of miraculous sign that He’s there, when all along, He’s within me, around me and outside of me. I even contemplated about dabbling into a new “religion” or faith, however my strong personal belief of the trinity held me from doing so. I did learn a great deal about eastern religions, as well as Judaism. The only thing different about my beliefs with all of these religions that I have been learning about is Jesus.

The last sentence that Laura spoke of resonated with me: “…but that doesn’t keep a person from going through the various tribulations life presents to us.” I guess I threw my hands up in despair and said, “I give up”, to God, because something trivial or irritating happened in my life. Life’s supposed to be perfect, right? We’re supposed to have everything “just right”. The fact is, the more faith you have, the more struggles you’ll have – it’s a law in Christianity. All of my conversations with people of different religions focus on an important thing: connection and being one with everybody. In another light, you can view that belief as, treating those around you as you would yourself. But my question is, what if you treat somebody less than suitable as a Christian or any other religious belief, does that mean God isn’t present within you? Does it mean that you’re a bad person? Or does it mean that you struggle with forgiveness, conflicts, emotional turmoil and how to handle negative interactions?

Most people in the LGBT community are put off by the concept of Christianity, due to mere people. It’s sad, because they trek off in another direction and feel as though they’ve been rejected all over again - and worse yet, by God Himself. So, with that being said, isn’t it sinful to turn your “brother or sister” away from God, rather than draw them in? I don’t care if your Buddhist, Muslim, Jewish, Hindu or Christian, shouldn’t we be encouraging others to draw closer to God, rather than belittle them because of their human shortcomings? We’re inevitably going to be hypocritical. The main reason for that being: we’re human. We’re flawed. We make mistakes and tumble into the big bad “S” word: sin. So does that make us any less than anybody else? Does it make God hate us? Doesn’t God already know we’re flawed? Or did He forget that?

Through my many discussions with the LGBT community lately, I wanted to hear your thoughts regarding personal beliefs, religions and lack thereof and how that can affect those who are trying to seek out a different religion – or just a new religion for the first time.

So many of us are lost and need answers. There’s never a solid answer when it comes to personal beliefs and religions, but there’s always hope that something may shine above the rest.